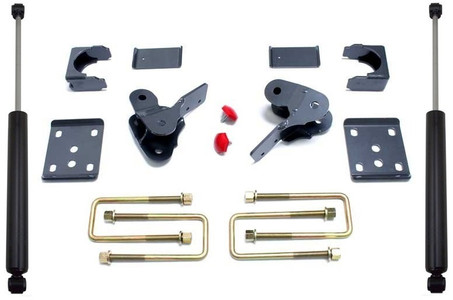 MaxTrac Suspension 203440 4" rear flip kit for your 2009-2014 Ford F-150 2wd/4wd offers a moderate drop height that gives you the lowered stance, but not something extreme enough to have to creep up driveways. The 4" rear lowering kit on the 09-14 body styled F150s requires a brand new design, much different than what any other truck requires. MaxTrac chose to fabricate a system that would provide a great ride, easy install, and good looks. No one wants to pay hundreds of dollars in parts and shipping on new leaf springs, our kit keeps your stock leafs, flips the axle underneath, and raises it up a couple inches to achieve the 4" in the rear. MaxTrac 203440 also offers replacement 4" drop rear shocks for your 2009-2014 Ford F150. The shocks are twin tube, black body, universal gas charged. All the necessary hardware is included as well.