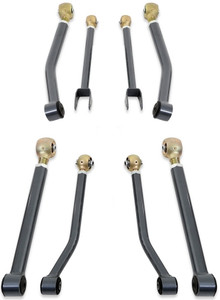 Any time you lift your Jeep, the axles will move toward the center line of the vehicle and, in order to get them re-centered in the wheel wells, you'll need these front and rear MaxTrac adjustable control arms. Also, when you lift a solid axle vehicle like a Jeep, you will change both the pinion angle and the caster angle of both axles. Having adjustable controls arms will let you dial those angles back in. These MaxTrac control arms are really strong and they're gonna hold up to whatever abuse you want to throw at them!